Jaguars, such as this one photographed at Omaha’s Henry Doorly Zoo and Aquarium in Nebraska, are the largest cats in the Americas.

Jaguars are the only big cat in the Americas and the third biggest in the world after tigers and lions. They look a lot like leopards, which live in Africa and Asia, but jaguars’ spots are more complex and often have a dot in the center.

These powerful cats were worshipped as gods in many ancient South American cultures, and representations of the jaguar show up in the art and archaeology of pre-Columbian cultures across the jaguar’s range.

Unlike many other cats, jaguars do not avoid water. In fact, they are quite good swimmers. They hunt fish, turtles, and even caimans, using their incredibly powerful jaws to pierce the animals’ skulls. Jaguars also eat deer, peccaries, capybaras, tapirs, and a number of other land animals, which they prefer to ambush at night.

Jaguars live alone, and they’re territorial—they define their area by marking with their waste or clawing trees.

Females have litters of one to four cubs, which are blind and helpless at birth. The mother stays with them and defends them fiercely from any animal that may approach—even their own father. Young jaguars learn to hunt by living with their mothers for two years or more.

Jaguars once roamed broadly from central Argentina all the way up to the southwestern United States. Since the 1880s, they’ve lost more than half their territory. Their main stronghold today is the Amazon Basin, though they still exist in smaller numbers through Central America as well.

They’re typically found in tropical rainforests but also live in savannas and grasslands.

Jaguars face a number of threats, including habitat fragmentation and illegal killing. South and Central America’s high rates of deforestation—for grazing land, agriculture, and other uses—have not only destroyed jaguars’ habitat but also broken it up. Fragmented forests mean that cats get boxed into patches of forest and can’t travel far to find new mates. That kind of isolation can lead to inbreeding and local extinctions.

Poaching is another growing problem for jaguars. They’ve long been hunted for their pelts, and now there’s a growing illegal, international trade in jaguar teeth and jaguar bone products going to China.

Jaguars are classified as near-threatened by the International Union for the Conservation of Nature. The species has national protections in almost every country it’s found, and trade in its parts is banned by CITES, a global treaty that regulates the cross-border wildlife trade. Still, poaching and the illegal trade continues so strengthening law enforcement is important.

There are major efforts to support and develop jaguar corridors to connect isolated populations as well as to work with ranchers to reduce human-jaguar conflict. Workshops help ranchers learn better husbandry practices, and a growing number of programs compensate ranchers when they lose cattle to jaguars, so that they’re less motivated to kill the cat in retaliation.

Fighting deforestation, which a number of international NGOs and indigenous groups are involved in, is critical.

What do jaguars eat? 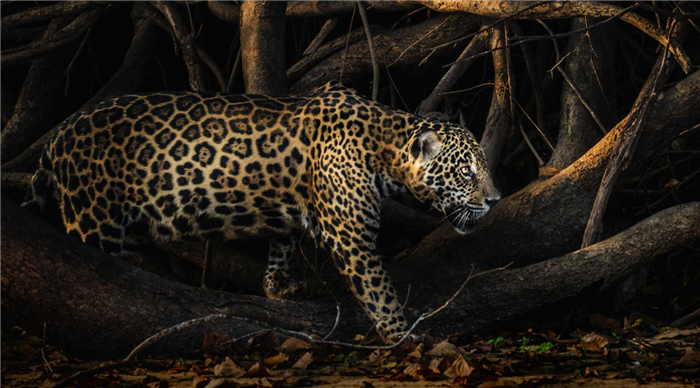 The word ‘jaguar’ comes from the indigenous word ‘yaguar’, which means ‘he who kills with one leap’. You’ll find out why later. 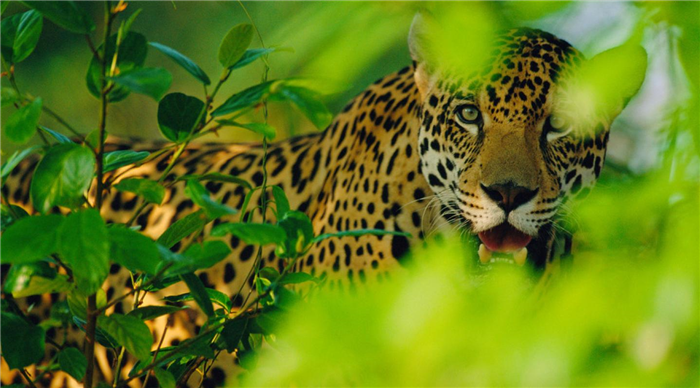 Their territory is shrinking

Jaguars used to be found from the south-west USA, throughout South America to almost the far north in Argentina. Now, they’ve been virtually eliminated from half of their historic range.

There are around 173,000 jaguars left in the world today, and most of these big cats are found in the Amazon rainforest and the Pantanal, the largest tropical wetland. Their stronghold is in Brazil – it may hold around half of the estimated wild numbers. 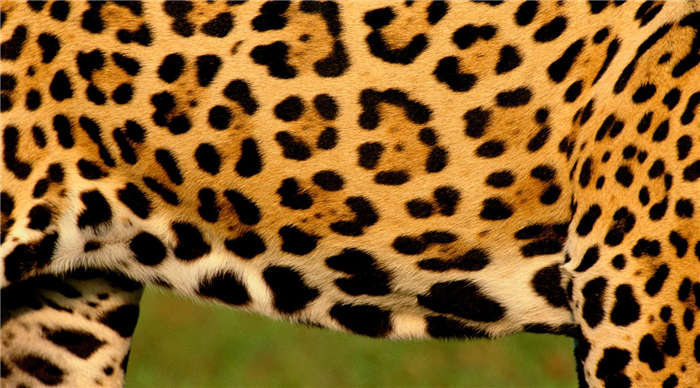 They’re on the chunky side

The jaguar is the third biggest cat in the world – after the tiger and the lion – and is the largest cat in the Americas. They can grow up to 170cm long, not including their impressive tails which can be up to 80cm. 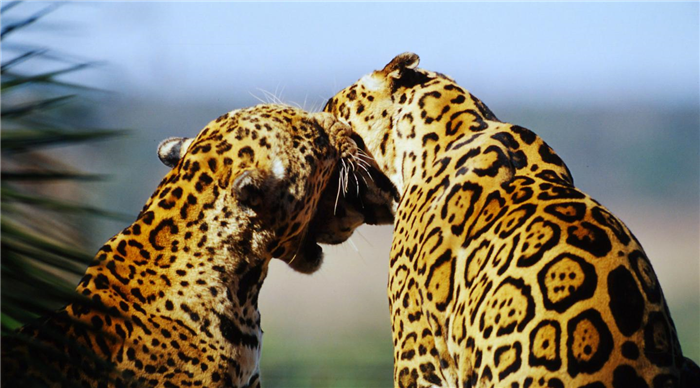 To the untrained eye, jaguars can be mistaken for leopards as they look similar, but you can tell the difference from their rosettes (circular markings): Jaguars have black dots in the middle of some of their rosettes, whereas leopards don’t. Jaguars also have larger, rounded heads and short legs.

Jaguars can be “melanistic”, where they appear almost as if they are black jaguars. However, this is a commonly misidentified term as melanistic jaguars (and leopards) are known as “black panthers”. 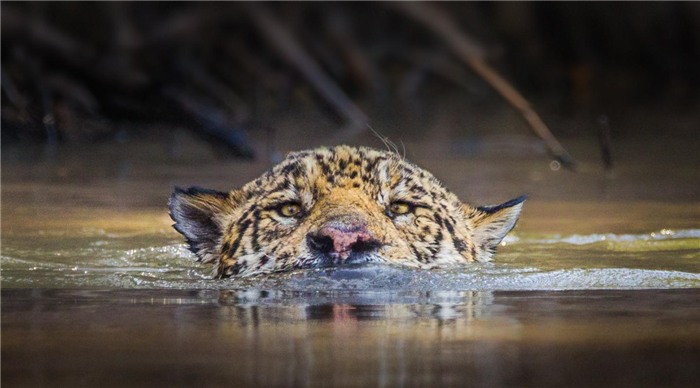 Unlike many domestic cats, jaguars don’t avoid water. They have adapted to living in wet environments, and can be found swimming in lakes, rivers and wetlands. They are confident swimmers, known to cross large rivers. 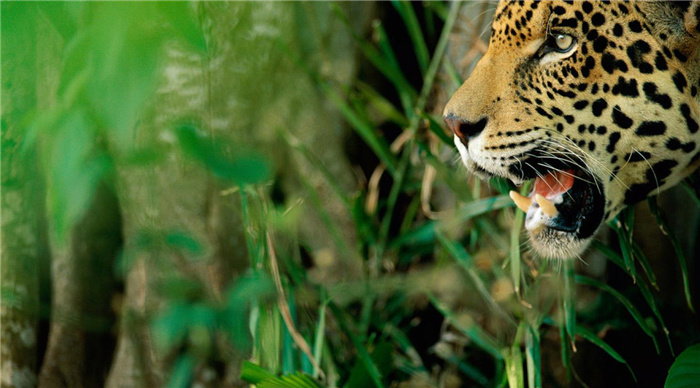 Both males and females roar, which helps bring them together when they want to mate.

A jaguar’s usual call is called a ‘saw’ because it sounds like the sawing of wood – but with the saw only moving in one direction.

When jaguars greet each other, or reassure one another, they make a noise like a nasally snuffling. 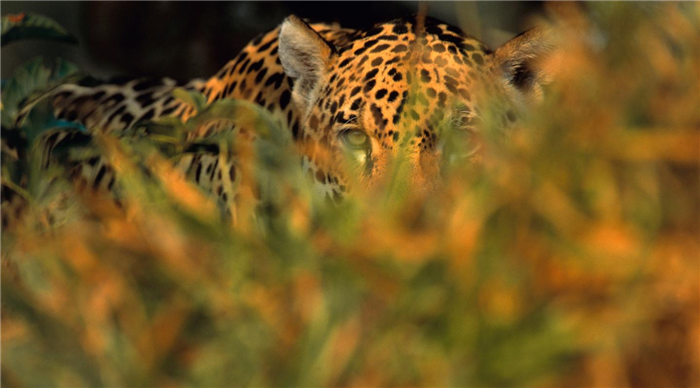 Jaguars are opportunistic hunters and can prey upon almost anything they come across. Capybaras, deer, tortoises, iguanas, armadillos, fish, birds and monkeys are just some of the prey that jaguars eat. They can even tackle South America’s largest animal, the tapir, and huge predators like caiman.

Jaguars are nocturnal as well as diurnal big cats, as they hunt both in the day and at night and usually travel up to 10km (over 6 miles) a night when hunting. 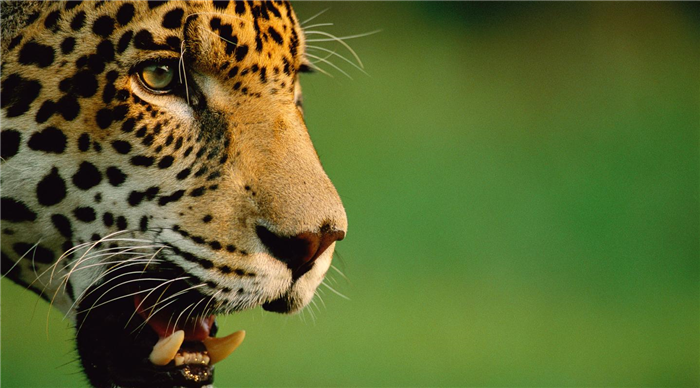 They kill with a powerful bite

Jaguars have a more powerful bite than any other big cat. Their teeth are strong enough to bite through the thick hides of crocodilians and the hard shells of turtles.

They need powerful teeth and jaws to take down prey three to four times their own weight – usually killing it with a bite to the back of the skull rather than biting the neck or throat like other big cats.

Like other cats, their tongues have sharp-pointed bumps, called papillae, which are used to scrape meat off bones. 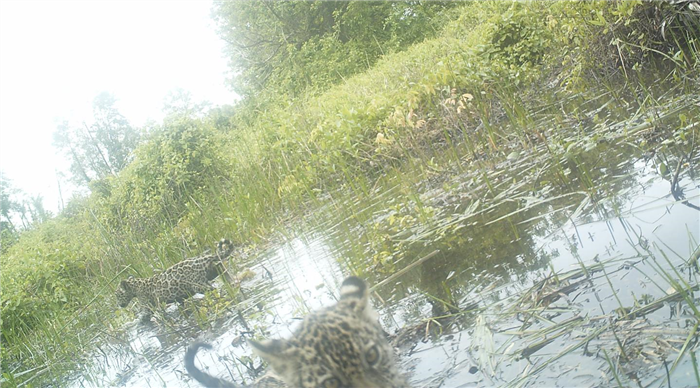 When breeding, a pair of jaguars may mate up to 100 times a day. That’s exhausting.

Pregnancy lasts around 14 weeks, then the female usually gives birth to two jaguar cubs (though she can have up to four).

Jaguar cubs weigh about the same as a loaf of bread when they’re born, but they soon grow. At two years old, males can be 50% heavier than their female siblings. 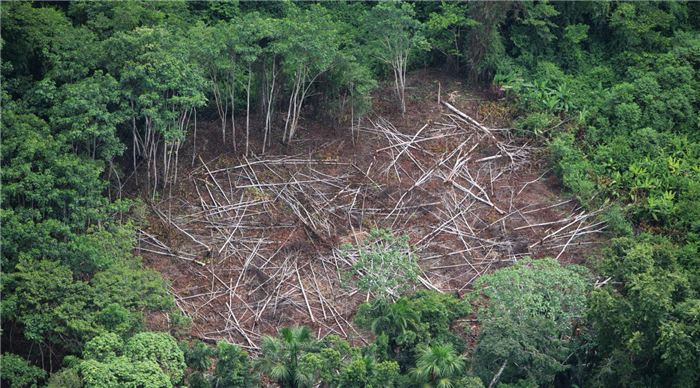 Deforestation rates are high in South America, both for logging and to clear space for cattle ranching. This results in many new threats to jaguars, from the loss of their home to isolating their populations, making breeding harder. Less habitat also means jaguars’ prey is reduced – over a quarter of their range is thought to have depleted numbers of wild prey. This leads them to hunt livestock and be killed by people.

They’re also vulnerable to poaching, despite this being illegal.

Though demand for their skins has declined since the mid-1970s, jaguar paws, teeth and other parts are still sought after, mostly from China for traditional medicine and ornaments.

Eating Habits of the Amazon Jaguar

Jaguars are the largest cats in South America. Between their size, their powerful bites, and their impressive climbing and swimming abilities, jaguars are particularly well-suited for hunting. Because they primarily stay in densely wooded areas near bodies of water, the Amazon basin has a notably high concentration of these creatures, who find their prey in the river and in the surrounding jungle.

In the waters of the Amazon, jaguars feast on turtles and fish. They may prey on caimans, smallish members of the alligator family who can reach lengths of 6 feet. Within the jungle, jaguars eat birds and monkeys; they may even stealthily climb trees for ambush. In the grasses outside the jungle, they may hunt four-legged prey like peccaries, tapirs and deer. Generally, jaguars are not picky eaters, but they prefer to stalk their prey from the ground before closing in and attacking with their powerful jaws.

What Do Jaguars Eat? 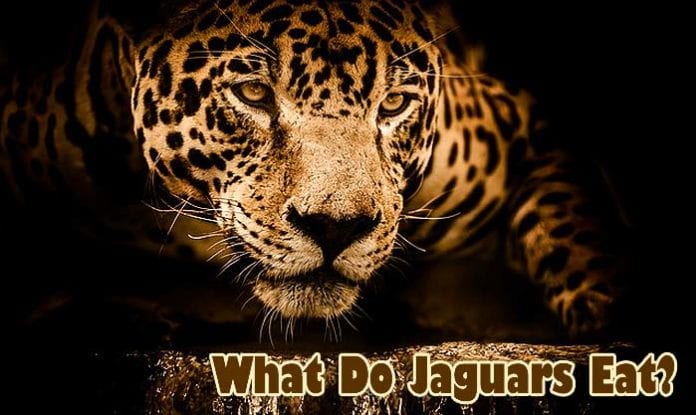 What Do Jaguars Eat? Jaguars are enormous cats found mostly in north, south, and Central America. When looking at their size, jaguars come in at third place after lions and tigers. These cats are known for their unique dark spots which line their yellow-orange coats.

The dark spots are also referred to as rosettes because they resemble roses.

Jaguars are strict carnivores. These animals feed mainly on meat which may be from fish, mammals such as monkeys (Geoffroy’s Spider Monkey), armadillos, birds such as peacocks, or reptiles.

What do Jaguars Eat? 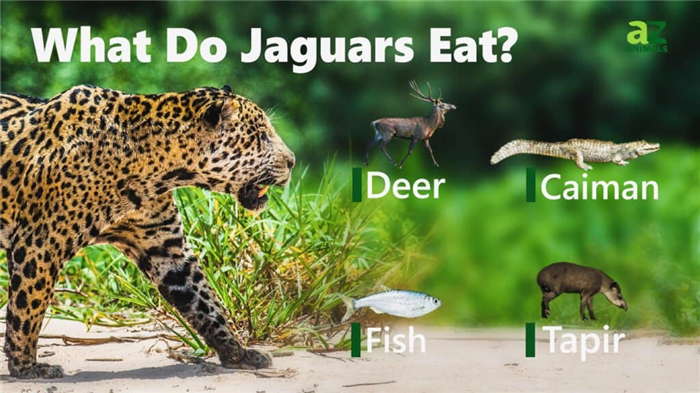 Types of Jaguars and their Habitats 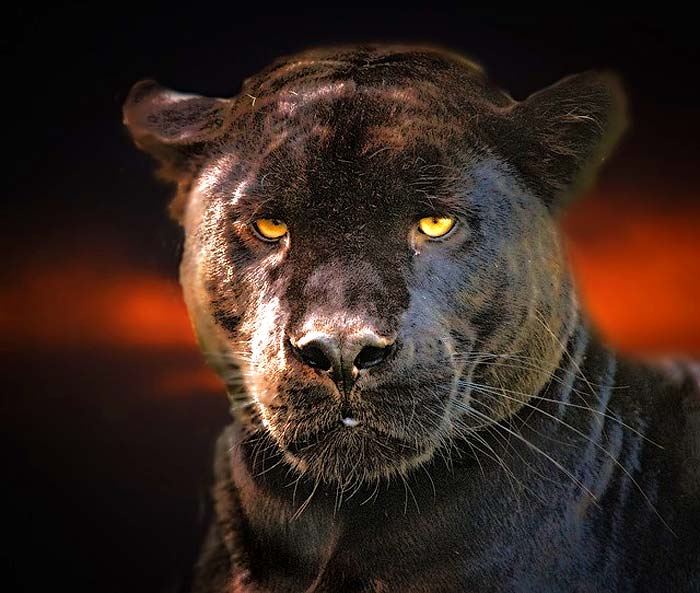 Jaguars are the only existing species of the genus Panthera native to the Americas. Only one jaguar species exists Panthera onca. 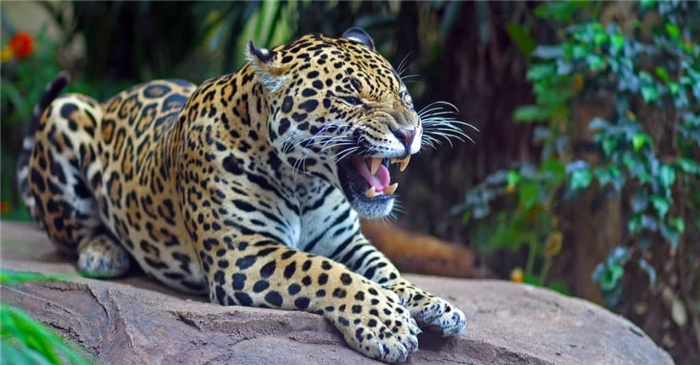 How Do Jaguars Hunt?

Jaguars are strictly carnivorous. For them to survive, they have developed good hunting strategies. 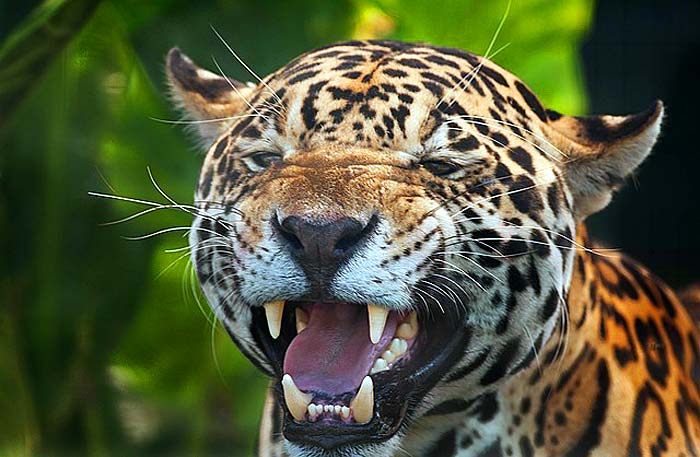 When Do Jaguars Eat?

Previously thought to be nocturnal, jaguars are crepuscular.

How often do Jaguars Eat?

Jaguars eat daily. An average-sized adult diet eats close to 50 pounds of meat during times when it has not had enough food. 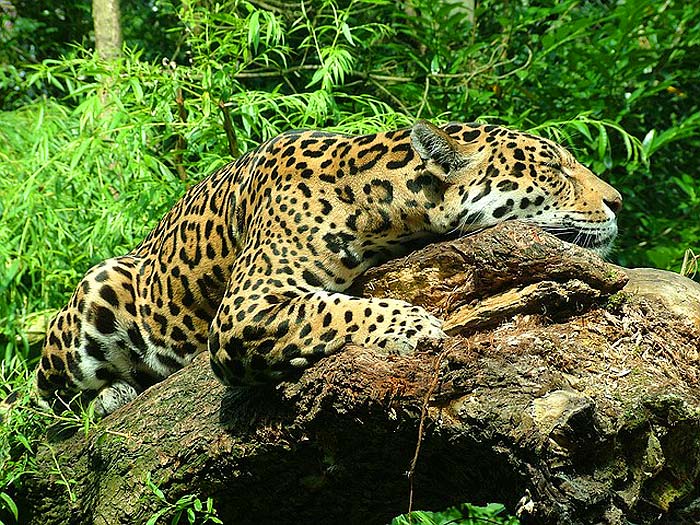 Jaguars are at the apex of their ecosystem, meaning they have very few predators.

Where do Jaguars fit in the Animal Food Chain?

Jaguars play a vital role in the ecosystem because these big cats are at the top of their food chain.

Given the above, it is evident that protecting jaguars and the environments they live in is an instrumental cause in the pursuance to ensure the presence of a thriving ecosystem.

How Do Jaguars Hunt Their Prey? 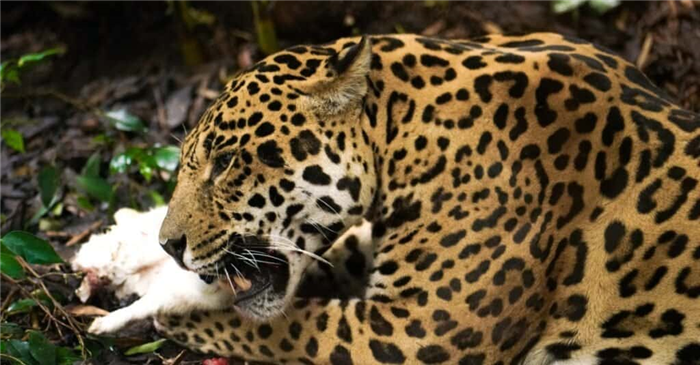 A jaguar uses its teeth to tear into its unfortunate prey

For jaguars, stealth is the name of the game. As nocturnal “stalk-and-ambush” predators, they will locate and follow their prey from a distance, staying just out of sight until they strike. Interestingly, the name jaguar actually originates from the Native American word yajuar, which translates to “he who kills with one leap.”

Additionally, jaguars have excellent vision, especially night vision, and huge, sharp canine teeth. These important features make it even easier for these big cats to incapacitate and devour their prey with astonishing grace and ease. While most cats within the Panthera genus kill their prey by biting and tearing at their throats, jaguars prefer to crush the skulls of their prey with their bite.

During a typical hunt, a jaguar will use its sharp night vision to locate its next meal. Then, it will slowly stalk the animal, staying just out of the animal’s line of sight, inching closer and closer until it is near enough to strike. Jaguars use the thick foliage and plant cover of their rainforest habitats to their advantage, often hiding under large leaves and branches so their prey can’t see them coming.

Finally, in the blink of an eye, the jaguar will pounce, delivering a skull-crushing bite to the back of the animal’s head. In fact, their bite force has been found to be the most powerful of all big cat species! After the jaguar crushes its prey’s skull, it then drags the animal off to a safe place such as their den, ripping it apart piece by piece with its huge teeth and powerful jaws.

Hailey Pruett is a freelance content writer, editor, and lifelong animal lover living in Tennessee with their spoiled cat, grumpy leopard gecko, and loving partner. Their favorite animals are lizards, turtles, snakes, and frogs. When they aren’t obsessively writing about how awesome reptiles and amphibians are, Hailey is usually playing relaxing life simulator video games and obscure, old-school RPGs. They are non-binary and comfortable with any pronouns.