The Atlantic bluefin tuna is one of the largest, fastest, and most gorgeously colored of all the world’s fishes. Their torpedo-shaped, streamlined bodies are built for speed and endurance. Their coloring—metallic blue on top and shimmering silver-white on the bottom—helps camouflage them from above and below. And their voracious appetite and varied diet pushes their average size to a whopping 6.5 feet in length and 550 pounds, although much larger specimens are not uncommon.

Unfortunately for the species however, bluefin meat also happens to be regarded as surpassingly delicious, particularly among sashimi eaters, and overfishing throughout their range has driven their numbers to critically low levels.

Atlantic bluefins are warm-blooded, a rare trait among fish, and are comfortable in the cold waters off Newfoundland and Iceland, as well as the tropical waters of the Gulf of Mexico and the Mediterranean Sea, where they go each year to spawn. They are among the most ambitiously migratory of all fish, and some tagged specimens have been tracked swimming from North American to European waters several times a year.

They are prized among sport fishers for their fight and speed, shooting through the water with their powerful, crescent-shaped tails up to 43 miles per hour. They can retract their dorsal and pectoral fins into slots to reduce drag. And some scientists think the series of “finlets” on their tails may even serve to reduce water turbulence.

Bluefins attain their enormous size by gorging themselves almost constantly on smaller fish, crustaceans, squid, and eels. They will also filter-feed on zooplankton and other small organisms and have even been observed eating kelp. The largest tuna ever recorded was an Atlantic bluefin caught off Nova Scotia that weighed 1,496 pounds.

Tuna are opportunistic eaters that adapt to the food available in its current environment. Although there are many types, four of the most common species of tuna include Bluefin, Yellowfin, Albacore and Bigeye. Each of these species employ sight, rather than smell or hearing, to successfully hunt and attack sources of food.

Bluefin Tuna, with their large size and quick aggressiveness, consume a variety of prey. Common food sources include herring, sanddabs, anchovies, mackerel, flying fish, squid, shrimp, eels, and surfperches, as well as smaller tuna. This species tends to hunt at dawn, midday and dusk. A study by the University of Palermo showed the size and age of the Bluefin as a direct correlation to the size of prey it pursues.

Yellowfin Tuna tend to find their prey in deeper ocean waters, although they have been known to feed near the surface as well. As such, the majority of its food consists of octopus, dolphin, squid, lobster, and other tuna. Yellowfin also eat anchovies, pilchards, and pelagic crabs. According to the National Aquatic Resources Research and Development Agency, a particular species of pelagic crab, C. smithii, is the most successful form of bait for Yellowfin Tuna.

The diet of Albacore Tuna varies depending on their location. They can be found near the surfaces of shallower waters abundant with smaller prey, but they do not feed on parasites or microscopic organisms. Little is known about the diet of Albacore Tuna because they are difficult to keep in captivity. However, fishermen have found success catching Albacore with small baitfish. Shrimp-like and crab-like animals have also been found in their stomachs.

What Do Bluefin Tuna Eat?

Sharks might be the first animals that come to mind when talking about predators in the ocean, but Bluefin Tuna deserves a spot in the conversation. 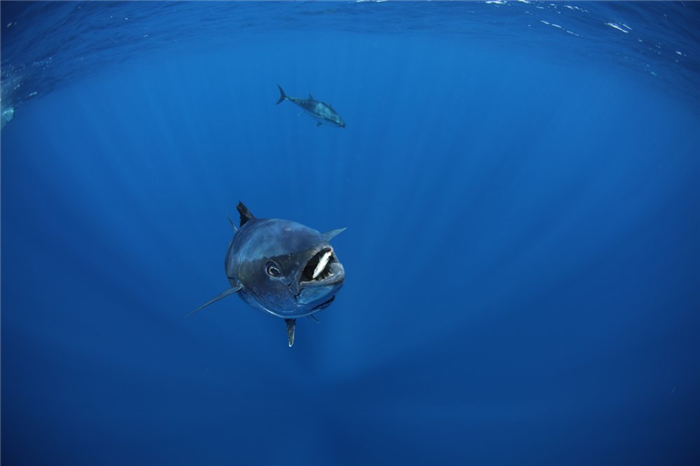 Typically thought of as commonplace in fishing and food, Bluefin Tuna sits near the top of the food chain.

The Bluefin are the largest member of the tuna family. The typical adult tuna can reach around seven feet in length and 500 pounds, and there have been recorded instances of tuna reaching up to 1,500 pounds.

The Atlantic Bluefin Tuna is typically found in the northern part of the Atlantic Ocean, ranging from Newfoundland down to the Gulf of Mexico. 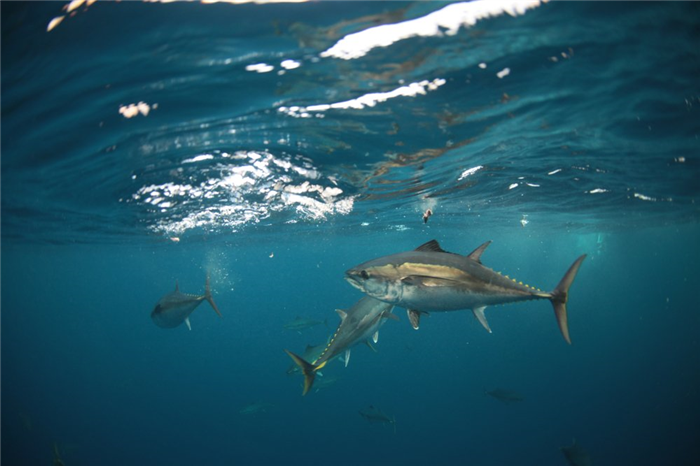 The fish has been known to dive as deep as 1,000 meters to live and hunt. The fish doesn’t reach that size on a small diet, and it has a wide range of food options from childhood through adulthood.

Here are some of the most common examples of what Bluefin Tuna eat.

While still growing and waiting to reach full maturation to advance to some larger prey, juvenile Bluefin Tuna typically have a smaller diet. 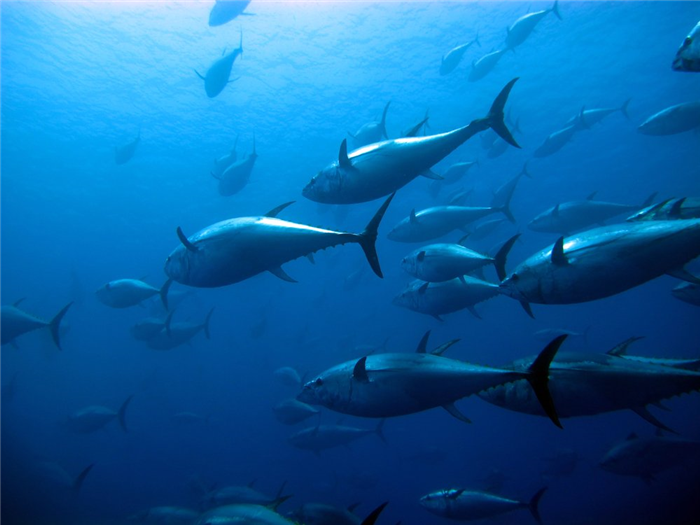 In the early stages of their life, they will eat zooplankton, and once they grow a bit, their diet consists of small fish, squid, and crustaceans.

Bluefin tuna lay millions of eggs every year, though the vast majority don’t reach adulthood since the eggs and young fish are targets for other predators.

Adults also feature these types of marine wildlife in their diet, but their options also increase to bigger fish as they grow.

What Do Tuna Eat? Their Diet Explained

Tuna are carnivorous and are a popular food choice among humans. We may eat tuna, but what does a tuna eat?

Each tuna can weigh more than a thousand pounds. They prefer temperate and tropical waters mainly in the Pacific, Indian and Atlantic oceans. They travel in the deep ocean, which makes them pelagic fish.

Their meat is so prized and ubiquitous that they’re at risk of being overfished, so international efforts are being made to protect these migratory fish.

Let’s look at what tuna eat so we understand how our sushi rolls and tuna packets came to be.

What Do Tuna Eat? 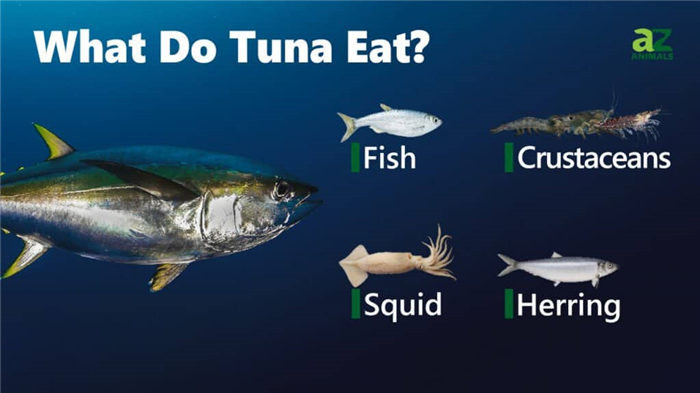 Tuna eat squid, fish, and crustaceans while roaming the ocean in large schools.

Tuna primarily eat shellfish, squid, and fish. Their main diet consists of squid if they’re the type of tuna that hangs out by the ocean’s surface. Tuna that spend most of their time in deep waters tend to eat cephalopods and fish. However, all tuna will eat anything from this list if given the opportunity.

Juvenile tuna eat zooplankton during the early stages of life. Tuna spend so much time swimming around the oceans that they have to eat up to 25% of their body weight every single day just to maintain their powerful muscles.

Why Do People Eat Tuna?

People eat tuna because it’s generally cheap, convenient, and nutritious for the price. However, tuna can also be expensive and some bluefin tuna in Japanese markets get auctioned off for thousands of dollars.

There are several tuna species including the most famous: albacore and bluefin. Yellowfin tuna and skipjack tuna also make it onto human menus in mass quantities. Most of the other tuna are safe from commercial fishing but are just as yummy as the big guns. Tuna are easily caught in mass quantities because they travel the oceans in huge schools.

A tuna’s meat isn’t your typical whitefish and is dark red or pink in color. That’s because tuna have powerful muscles which they need so they can migrate huge distances at about 50 mph. That isn’t to say that all tuna meat is colored; albacore tuna has white flesh yet still goes through extensive migrations.

Most tuna is canned, but the prime pieces are used in dishes like sushi. Tuna has been a popular source of food for centuries and it’s proven that moderate tuna consumption can aid heart health due to the amount of omega-3 fatty acids.

Use caution if you have a taste for tuna. Because they live for up to 40 years and are a top predator, their meat accumulates large mercury levels. Because of this, it’s recommended that consumption be limited to three servings per week. 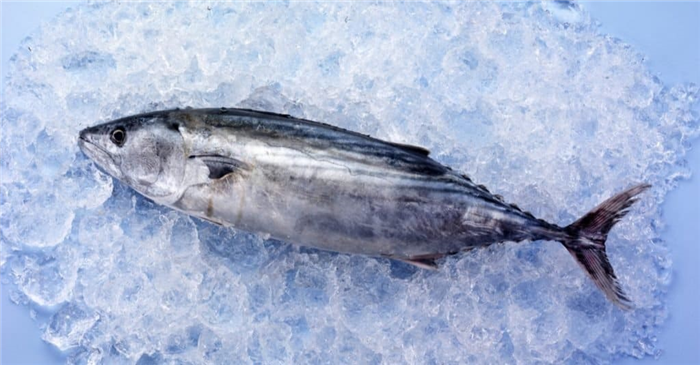 Do Tuna Have Any Predators?

Tuna are a top predator and do not have many predators of their own once they’re adults. Sharks, billfish, dolphins, and whales will make a hefty meal out of them if they get the chance.

As juveniles, larger fish and birds take advantage of their size and eat them. Their eggs are such a popular food item for other animals that a female tuna will lay around 1 million eggs per season.

Humans are some of the biggest predators due to overfishing. Conservation efforts are being put in place in some countries. The problem is that tuna undergo such a huge migration that they’ll still swim through waters where they can be caught by the thousands. Despite this, tuna stock is starting to rise again via the sanctions on their fishing.

Do Tuna Eat Other Tuna? 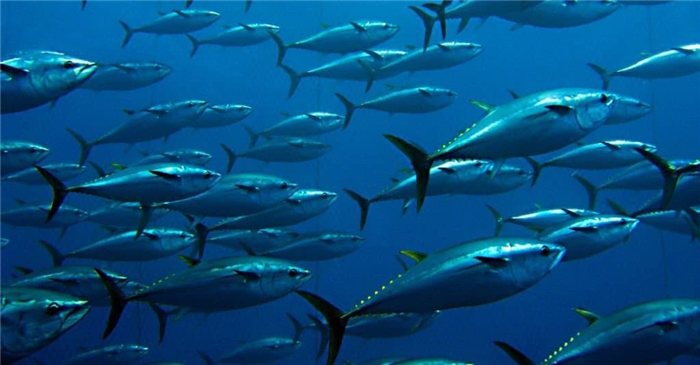 Yes, tuna will eat smaller tuna. Since they’re opportunistic feeders, if they come across a smaller tuna that’s a good meal size, they won’t hesitate to consume it.

Tuna prefer to swallow whatever they’re eating whole. That’s because their mouths are rounded and aren’t designed for biting and shredding. That’s why huge tuna don’t attack people.

Since they can be microscopic when they hatch from their egg, they go through a phase where they make good prey for their own kind and everyone else in the ocean. Not many are expected to make it to adulthood.

Why Does My Tuna Can Say Dolphin Free?

When a fisherman finds a tuna, they find a huge school of tuna. Before government sanctions and laws were put in place, fishing boats would drag a huge net through the water where the school resided and catch anything in the water. They would then keep the tuna and throw anything else back into the ocean.

Lots of dolphins were killed during this fishing process. Dolphins like to swim near schools of tuna, so they became entangled in the nets. In the 1990s, consumers demanded this change, and the dolphin-safe label was born.

It’s a misconception that tuna are eating the dolphins. Tuna aren’t designed to rip and shred prey. Even the smallest dolphin is much too large for a tuna to swallow whole. 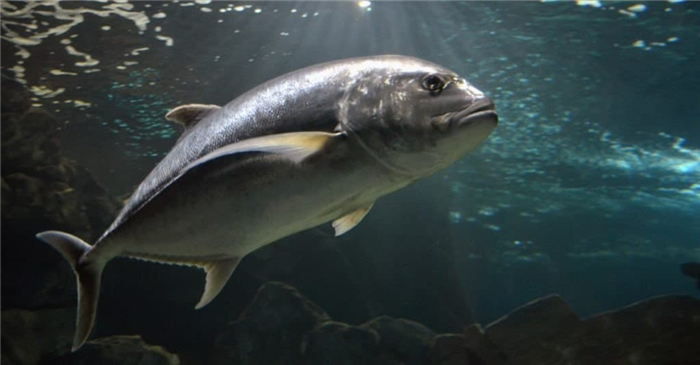 Why Does My Cat Want Tuna Can Water?

Your cat wants tuna water because it is a fish-scented bowl of water. It hydrates them while also tasting better than just plain tap water. Since cats are notorious for dehydrating themselves, even mixing a little tuna water into their daily water bowl can make them more interested in drinking.

Never feed a cat tuna that’s been packed in oil. This can give them diarrhea and a sour stomach. Also, don’t give tuna water as your cat’s primary food source. It’s low in the kind of nutrients that cats need and should only supplement a regular diet.

Just like in humans, overconsumption of tuna by your cat can lead to mercury concerns. Tuna water servings should be doled out sparingly. Some tuna contains spices, so make sure the tuna you feed your cat is plain.

I’m a freelance ghostwriter that specializes in SEO content. I have always loved writing, and when COVID happened, I went at my passion full tilt. I’m currently in Spokane, WA by way of Phoenix, AZ, though I’m originally from Sacramento, CA. Freelancing allows me the freedom to move around as I please.

How much tuna is safe to eat?

Fish Serving Size: An adult serving of fish is the amount that fits in the palm of your hand, or about 4 ounces. Therefore, the recommendation would make eating three to four 3-ounce cans of light tuna a week safe for adults.

The benefits of tuna Improves the health of your heart. The first of the contributions of tuna to your diet are the omega 3. . Help increase your muscle mass. . Improves brain function and delays deterioration. . Strengthens your immune system. . Fights depression. . Improves your circulation. . Improves your eye health. .